Isidor Kaufmann, my great grandfather, was born on March 22, 1853 in Arad, which was then part of the Austro-Hungarian Hapsburg empire. 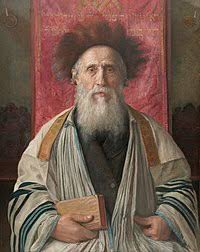 He loved to travel all over Eastern Europe, sketch book in hand, discreetly sketching the synagogues and members of the Hassidic community. Since images were not allowed, he could not paint there openly but would return to Vienna and  complete his amazing paintings.

He loved bringing the people to life whether they were poor ghetto inhabitants in Krakow, or an important Rabbi in Vienna. His parents were not enthusiastic about him painting (hardly a surprise) so he only started painting later in in life. At first he was rejected from the Academy of Fine Arts in Vienna, but he was determined and began studying under the portraitist Joseph Matthäus Aigner. His work was quickly considered worthy of collection and  even Emperor Franz Joseph owned a painting “The Rabbi’s Visit (Der Besuch des Rabbi). He received three medals of achievement to honour his paintings and lived to 1921 when he died in Vienna.

We are very proud that to-day you can see his paintings in the collections of the Tate Gallery in London, The Jewish Museum in New York, and the Kunsthistorisches Museum in Vienna, among others.